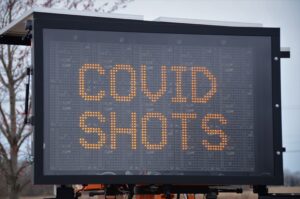 What have we learned in one year of COVAX?

Launched as a global cross-organization collaboration only one month after the pandemic was declared, COVAX was built to facilitate global equity in the pandemic response. As COVAX passes the one-year mark this month, there are some early lessons and insights that can inform its further development and help us prepare for future crises.

In terms of numbers, COVAX is short of the mark. Photo ops of government officials on the tarmac to meet planes full of doses and declarations of the numbers of countries reached can paint an optimistic picture. But the truth is that COVAX has delivered 43 million doses to 119 countries. This is only 2% of the way towards the 2 billion dose goal for 2021 and about 70 COVAX-participating countries have not yet received any doses (though some of these countries have waived their doses).

As Dr. Tedros wrote in the New York Times this week, we are nowhere near the 20% mark, and with significant supply constraints set to continue through the second quarter of 2021, this is not likely to change soon. COVAX is also However, it is not all bad news. COVAX has supported manufacturing deals and bulk purchases that would not have been feasible without its pooled procurement approach. And while distribution of vaccines is coming in more of a trickle than a wave, it is still getting doses to some of the most remote and poorest regions of the world. One year in, we can look back and begin to see what has worked and what needs rethinking.

Iterating in the midst of a crisis is difficult

COVAX was pulled together by a group of people who foresaw the dangers of inequitable access to vaccines in a pandemic, part of the ACT Accelerator that also focused on access to diagnostics and therapeutics. But at the time it was launched, the shape and timeline of the pandemic were unknown, the symptoms and impact of Covid-19 were still not well understood, and no one yet knew if or which vaccine would work. There was not the luxury of time to wait for these answers before designing and market testing an equity solution.

It is a difficult thing to build the car while you are driving it. The designers of COVAX and the partners who have steered its implementation have had to iterate as they go along, adding this, removing that. They have navigated the same dynamic landscape as national leaders, responding to changes in disease patterns, infection rates, vaccine trial results, manufacturing supply. But they’ve had to do all of this while keeping the world’s leaders engaged, maintaining a vision and strategy that would hold both wealthy and poor countries and everyone in between. It is worth keeping in mind the sheer difficulty of this task. To large degree, COVAX was down to grit and persistence.

Nationalism will win, so let’s plan for it

COVAX was premised on an all-for-one-and-one-for-all approach to defeating the pandemic. It was a way to invest together in a portfolio of vaccines and therapeutics and then ensure that the successful ones were shared out equally, regardless of country wealth or geopolitics. We know from economic and epidemiolocal modeling that this would have led to the best outcomes for everyone and was our best hope for ending the pandemic quickly. But we also know from experience that the world doesn’t really work this way. And COVAX used a traditional donor-aid model to drive an all-in-this-together program, leading to, as the Lancet put it this week, “a funding shortfall and a system not based on solidarity but rather one that reinforces inequities.”

For future iterations of COVAX, nationalism must be baked into the design from the beginning. COVAX needs to assume that government leaders will prioritize their own, and work with that. Perhaps vaccine makers could commit that 20% of every batch produced goes to supply COVAX, while 80% can go to the wealthy countries first in line. The important thing is to bake it in from the beginning so that it not a choice of “giving up” doses that leaders have to explain to their voting population.

COVAX can be described in many ways but transparent is not one of them. The risk-averse partnership has consistently kept its cards close to its chest, providing information only in broad strokes and only when absolutely necessary. While we can understand why, we also think this may be a strategic error.

When COVAX does share information, the tone tends to be defensive and protective and the data shared is difficult to parse. The risks and dangers inherent in the COVAX design are not lost on the watching world and simply choosing not to talk about them doesn’t make them disappear. Rather, clear messaging about the benefits of vaccine equity (which are well documented by others), what is needed to get there, and the potential pitfalls on the way could allow COVAX to drive and shape the story. Unfortunately, opaque supply updates built on data that cannot be externally validated undermine, rather than build, confidence.

COVAX is the largest purchaser in the Covid-19 vaccine market and could use its platform and purchasing power to push for more transparency and accountability in Covid-19 vaccine purchases and manufacturing. Making its supply deals public, including prices and delivery schedules, and clearly communicating about the gaps, could drive urgency and more transparency across the board.

The location of manufacturing matters and countries with domestic manufacturing of Covid-19 vaccines are better able to ensure supply. While COVAX was quick to secure manufacturing capacity, this is less relevant in the context of export controls. COVAX does not have a country or government and is unable to use policy levers to commandeer manufacturing when the going gets tough.

Ensuring equitable access to vaccines globally means that manufacturing must be global. There are a very limited number of manufacturing partners who could provide the scale of vaccine needed for COVAX and this led to an overreliance on Serum Institute of India (SII). When a second wave of Covid-19 infections hit India and sent it into crisis, export controls cut short the COVAX supply. There was no Plan B and no clear options for making up the shortage in production for countries counting on COVAX.

The world needs more regional manufacturing hubs that can produce vaccine independently and do not require drug substance to be imported from other regions. There is a particularly acute need in Latin America, the African continent, South East Asia, and the Pacific. With more equitably distributed manufacturing, COVAX or a similar future effort could draw on a broad network of manufacturing partners to supply the world and lower-income regions could control their own supply.

The world is better off with COVAX than without it. But one year in, we can see how far we are from the goal and the factors that have prevented success. One of the strengths of COVAX is its ability to iterate and it will continue to do so in a continually changing environment. And importantly, we now have something on which to build and improve for future global crises.

WHAT HAVE WE LEARNED IN ONE YEAR OF COVAX?
Tagged on: COVID    Equity    globalhealth    impact    Vaccines