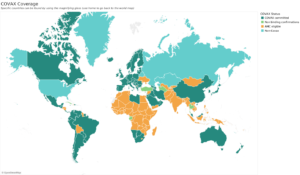 The US formally joined COVAX. Will it Matter?

Dr. Anthony Fauci, newly named the US Chief Medical Advisor, warmly addressed the WHO executive board within the first 24 hours of the Biden administration. Dr. Fauci confirmed that under President Joe Biden, the US will rejoin the WHO and will also join COVAX, the global mechanism designed to ensure equitable allocation of vaccines across the world.

The value of this move may be largely symbolic at this point. The US has already ordered enough vaccine through bilateral deals to cover 200% of its population and is the largest single donor to the COVAX effort, with $4 billion allocated to Gavi last month. But the symbolism is still powerful. The US is joining a multilateral approach to a multilateral problem and putting its weight behind a cooperative effort.

Last week, Dr. Tedros, Director General of the WHO, warned that “the world is on the brink of catastrophic moral failure” as vaccine deliveries flow to high income countries while poor countries wait. Our data show that high income countries, with 16% of the world’s population, reserved 60% of the Covid-19 vaccine that has been purchased and many have ordered enough vaccine to cover their population several times over. Middle- and low-income countries, however, are clearly in trouble.

Significant gaps in vaccine access threaten everyone. Some middle-income countries have secured vaccine deals but not enough to cover their population. Many have not yet purchased any vaccine. We just saw the first purchase for low-income countries come through last week, with the African Union’s purchase of 270 million doses that will be allocated to countries across Africa.

Unequal distribution of the vaccines is dangerous for everyone. In addition to the ethical arguments, modeling of the health and economic impacts of vaccine access demonstrates that we are all much worse off if poor and rich countries do not receive the vaccine at the same time. It would cost about $25 billion USD to supply enough vaccines for lower-income countries. But it will cost high income countries about $120 billion a year in lost GDP if this is not done.

But wealthy countries face competing incentives, wanting both to ensure their populations are covered as quickly as possible and also to support global equity. Unfortunately, the first undermines the second.

In practical terms, there are two significant ways that the US and other high-income COVAX countries can help to close the gap that Dr. Tedros warns about. The first is funding. WHO needs $27 billion in 2021 to support Covid-19 tests, drugs, and vaccines. The US and other wealthy countries must continue to support global efforts to fight the pandemic.

The second is through donation of excess doses, on the same timescale as vaccination in wealthy countries. COVAX announced on Jan 22 that, in addition to 40 million doses from Pfizer-BioNTech, the multilateral partnerships will have another nearly 150 million doses of Oxford-AstraZeneca vaccine (some from SII and some directly from AZ) available to ship out this quarter. This means fewer than 200 million doses are expected to ship out across 190 COVAX countries by end of March.

To cover the gap, rich countries must donate doses to cover the most vulnerable in other countries before they have covered their general population. Norway has led on this front, stating that they will donate excess doses “in parallel” with vaccination of the Norwegian population. India and China, both middle-income countries, have also begun shipping donated doses to poor countries while still vaccinating their high-priority populations. Canada, the UK, and the EU have stated their commitment to sharing extra doses but have not said whether they will do so before finishing vaccination of their populations.

The high-income countries in COVAX, including the US, have already scooped many doses off the market, hampering efforts for efficient and equitable allocation. But these countries have an opportunity to support the COVAX goal of equitable access by redirecting extra doses to other countries now, so that all vulnerable populations can be vaccinated, preventing needless death.

For more information on this research and our findings, please go to https://launchandscalefaster.org/COVID–19.

THE US FORMALLY JOINED COVAX. WILL IT MATTER?
Tagged on: COVID    Equity    globalhealth    Vaccines