Duke University is releasing today (Thursday, June 18, 2020) the results of its two-year evaluation of the Saving Lives at Birth (SL@B) Grand Challenge for Development. Co-led by the Duke Global Health Innovation Center and Duke Global Health Institute Evidence Lab, the  evaluation  seeks to examine SL@B in the global landscape of maternal and newborn health (MNH) innovation funding, understand the role of SL@B in filling a gap in MNH innovation funding, and analyze the impact of SL@B on sourcing and scaling MNH innovations between 2011 and 2020. The evaluation utilized a quantitative and qualitative mixed-methods approach using multiple sources of data and produced several work products in the form of reports and briefs, culminating in the report released today.

In 2015, WHO estimates over 300,000 women died due to complications of pregnancy and/or childbirth. Nearly all (99%) of those deaths occurred in low- and middle-income countries (LMICs), where women from rural, poor communities are the most impacted. The majority of maternal deaths are also preventable or treatable; they occur because too many women lack access to emergency obstetric care, skilled birth attendants, high-quality antenatal care (ANC), and family planning services. Pregnant women continue to die from four major causes: severe bleeding after childbirth, infections, hypertensive disorders, and unsafe abortions.

WHO estimates that 2.5 million infants die within the first month of life each year. Stillbirth accounts for an additional 2.5 million deaths every year. The three major causes of neonatal deaths worldwide are infections (36%, which includes sepsis/pneumonia, tetanus and diarrhea), pre-term births (28%), and birth asphyxia (23%).  Neonatal mortality rates are highest in southern Asia where neonatal mortality accounts for 62% of the under-5 mortality rate , but remain widespread across LMICs.

Established in 2011, the SL@B program has taken a non-traditional approach to address the deaths of millions of women and newborns each year due to severe, but largely preventable illness or death. While most other efforts invest in the implementation of conventional, evidence-based practices, SL@B has focused on identifying innovative (and often untested) solutions with the potential to bring about transformative impact.

As an example of SL@B’s approach, we highlight JSI Research & Training Institute, a SL@B grantee. Unclean umbilical cord-cutting practices such as the use of sharp, non-disinfected household objects covered with turmeric, mustard oil paste or other traditional practices are a leading contributor to infection-related newborn deaths in Nepal. Toaddress this preventable cause of neonatal mortality, JSI partnered with the Ministry of Health in Nepal in 2006 to use antiseptic chlorhexidine for the care of newborn cord stumps. Demonstrating small-scale success at the community level, JSI subsequently partnered with MoH to scale at a national level. In 2011, JSI received a transition-to-scale grant and technical assistance from SL@B, such as facilitated connections for the Chlorhexidine program. The effort was successful, and Chlorhexidine is now part of essential newborn care in Nepal. In 2013, WHO added Chlorhexidine to the WHO Model List of Essential Medicines for Children. 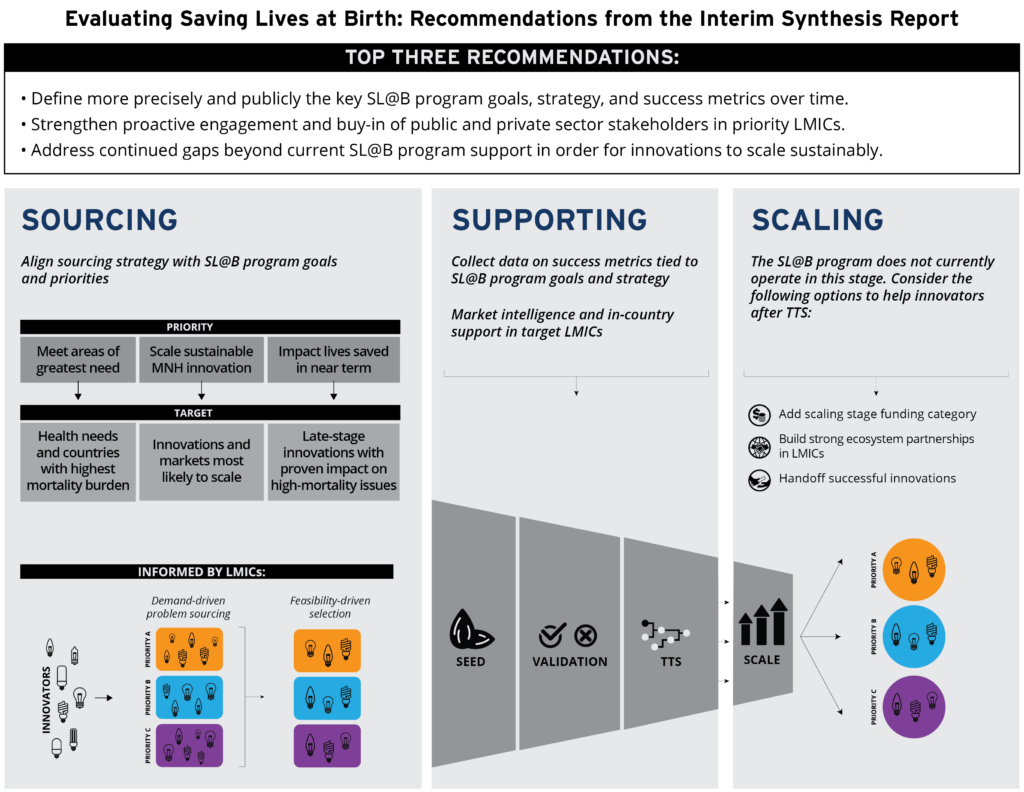 Key Highlights from the Evaluation

Based on the research, the Duke team found that:

The Duke research team also identified key priorities for continued improvement and refinement of SL@B and similar programs in the future:

The full evaluation report can be found here. The SL@B program was funded by of the USAID, the Norwegian Agency for Development Cooperation, the Bill and Melinda Gates Foundation, Grand Challenges Canada, the U.K. Department for International Development, and the Korea International Cooperation Agency. Duke’s evaluation was supported by USAID and Grand Challenges Canada.

Saving Lives at Birth: Evaluating the Impact of a Grand Challenge for Development