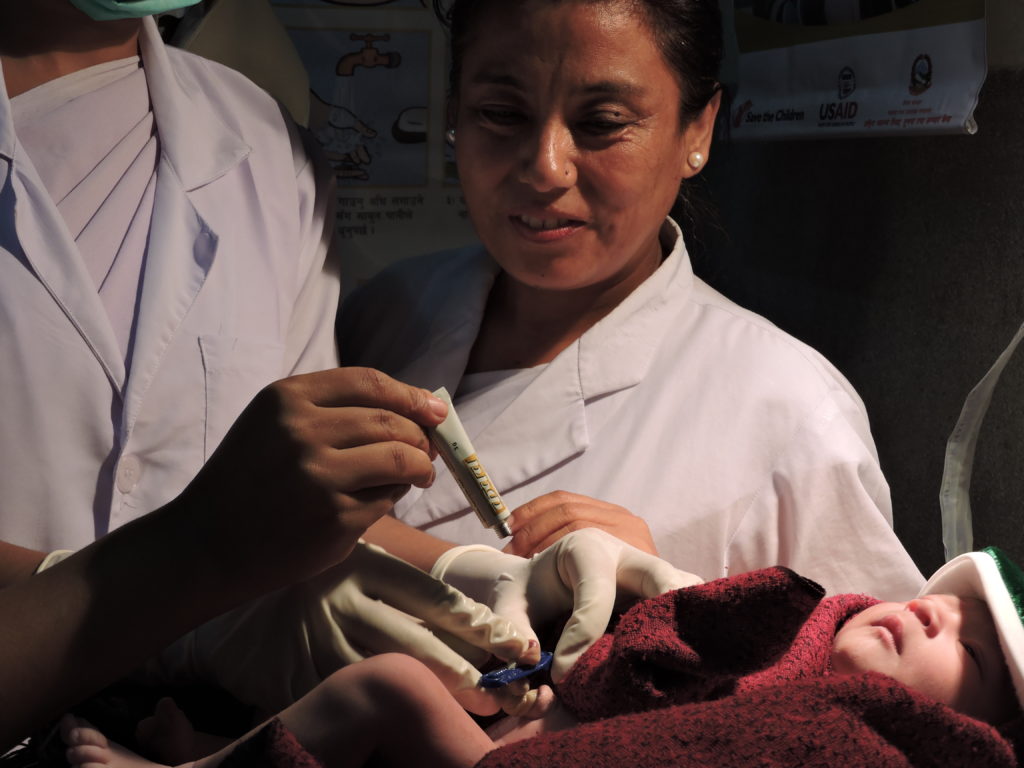 Sepsis in the first week or two of life is a major cause of newborn deaths. Deeply rooted cultural practices surrounding the care of the newborn’s umbilicus are a large part of the reason why Nepal’s neonatal mortality rate did not improve between 2006 and 2011 and remained stagnant at 33 deaths/1000 (DHS survey of Nepal 2006 and 2011) live births.  Mothers and grandmothers preferred traditional practices that contributed to the high neonatal death rate, such as treating the fresh umbilical stump with turmeric, mustard oil paste, ash, unknown medicine, even cow dung or vermillion—the bright red cosmetic powder used by Hindu women. These practices can lead to the introduction of pathogens, sepsis and neonatal deaths.

Nepal is rapidly increasing the rate of facility delivery, but we also know that mothers and babies are almost immediately discharged into the same environment that home-born babies experience. Furthermore, we recognize that achieving hygienic delivery and keeping the cut umbilical cord unexposed to pathogens is nearly impossible in the vast majority of these facilities, where basic necessities such as running water and electricity are often lacking. Even in tertiary care hospitals in large cities we know that exposure to invasive organisms is frequent, and nosocomial infections in babies are hard to prevent without active interventions.

“Chlorhexidine (CHX) is a broad-spectrum antiseptic, effective on gram positive and gram negative bacteria as well as some viruses, having strong skin binding effect. Randomized controlled trials conducted in South Asian countries have proven that the use of chlorhexidine for cord care can reduce neonatal mortality by 23% and prevent severe cord infections by 68%. The study also revealed that an estimated 1 in 6 neonatal deaths could be averted with chlorhexidine cord care” (Steve Hodgins, 2013).

In late 2011, Nepal became the first country in the world to introduce chlorhexidine for umbilical cord care and committed to scale its use nationwide. This was possible because of the strong, committed government leaders, implementation partners, professional societies, and the private sector who all worked together to translate those research findings into action.

Now, as CHX use is part of essential newborn care in the government program, it has been scaled up national wide. It is estimated that by March 2019 this intervention had saved at least 12,000 newborn’s lives. Nepal’s 2016 Demographic Health Survey revealed a neonatal mortality rate of 21/1000 live births, the first decline in 10-15 years, and part of this success can be attributed to CHX use. Nepal became a living university for chlorhexidine, and to date more than 20 national delegations have visited the chlorhexidine program and the Nepal team has provided technical assistance to introduce a Chlorhexidine program in about 20 other countries with high neonatal mortality.

Key lessons learned from the Nepal program are: